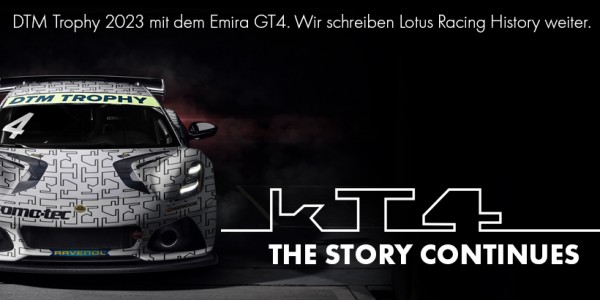 Mendig, Germany - 27 October 2022: Komo-Tec Racing will operate two of the brand new Lotus Emira GT4 race-cars in 2023 in the well-known sports car racing series DTM Trophy hosted by ITR e.V. who have been affiliated to the DMSB-FIA since 1984. The series is based in Germany, with races of the GT4 racing cars elsewhere in Europe since 2020.

Named the kt4 racing mission, two Lotus Emira GT4 will compete in this attractive sports car racing series, starting against brands like Aston Martin, McLaren, BMW and Porsche. After multiple race and championship victories over the last 10 years with the legendary Lotus Evora GT4 and Lotus Exige Cup R, Komo-Tec will enter the next generation of sports car racing with two Lotus Emira GT4, demonstrating the GT4’s dynamic capabilities and the distinctive Lotus engineering and car design that have shaped countless race cars since Lotus was founded in 1948. In 2023 Lotus will celebrate its 75th anniversary and it´s therefore a very special moment for Komo-Tec and the whole team to be part of this next milestone in Lotus’ sports car racing history.

„Having successfully raced the Lotus Evora GT4 and the Lotus Exige Cup R we are looking forward to the next challenge in sports car racing by participating in the DTM Trophy with the first two Lotus Emira GT4 cars being produced. For more than 30 years we have been competing in motor racing and with our project KT4 racing mission we are ready to continue our series of success in this prestigious racing series.“ Daniel Koblitschek - Founder & Managing Director Komo-Tec Inc.

The Lotus Emira GT4 is the first new model launched by Lotus Advanced Performance. The car marks a start of an exciting new era in performance GT racing for Lotus. The all-new Emira GT4 race car was unveiled on May 5, 2022, at Hethel UK on the iconic test track, with a dynamic demonstration of its thrilling performance. The return to world motorsport marks a key pillar for the Lotus company transformation from a UK sports car company to a global performance car business and brand.

The DTM Trophy is the well-known European race series accompanying the world famous German Touring Championship (DTM) hosted by ITR e.V., who have been affiliated to the DMSB-FIA since 1984. The series is based in Germany with races elsewhere in Germany since 2020. The GT4 cars participating in this series are based on production vehicles.

Komo-Tec Inc. Since its foundation in 1997 Komo-Tec located in Mendig/Eifel, Germany – very close to the Nuerburgring – is specialized in servicing and optimizing Lotus cars as well as custom made spare parts and engine optimization for Lotus vehicles. Over the last years Komo-Tec has successfully participated in the Lotus Cup Europe, currently achieving another championship victory with Tamas Vizin in the Lotus Exige GT4 class in 2022. In 2010 Komo-Tec was announced Official Lotus Service Partner and in 2014 has become an official Lotus dealership for new and used Lotus cars.

Komo-Tec Racing is the racing division of Komo-Tec which operates and supports their own and customer-owned current and historic racing cars – amongst others a Lotus 30 from 1964 - in Germany and Europe. Apart from the Lotus Cup Europe sports racing cars have been operated in the Masters Endurance Legends Championship and in Lotus CE trackdays.